Hope you are all doing well! I have been working like crazy lately to be able to afford my latest trip to Europe (which I will talk about more in future posts!)! So I am trying to take as many shifts as possible! So far so good on the savings front!

I wanted to talk a bit about my degree! I get questioned a lot about it, and people are always so confused if I graduated or not, because I currently don’t work a job that has to do with my degree!

Yes- I did graduate last summer! It was an amazing feeling! After 4- 5 years of feeling stressed out and overwhelmed, I have finally graduated and realized that it was all worth the stress! I have an arts degree with a major in anthropology and a minor in psychology. I didn’t love my minor, I just had a lot of credits in that field already, so I went that route.

My whole university career was a mess of confusion and me trying to decide what I wanted. Originally, I was in school to be a teacher, and I had a great fear of speaking in public. People told me all the time “You’ll get over it eventually”, but I dropped out of the program anyways. I could’ve gotten over that fear, but I didn’t want to deal with the process of getting over it because the end result was not something I really wanted in the end! So, I was stumped. I was Iike what do I do now? I thought I had everything figured out, but in the end I didn’t, so I was confused and anxious trying to decide. I finally went to the school councillor and her biggest piece of advice was to just finish my degree. I left and was like what the f*ck lady! Why can’t you just tell me what I want to do?!

Finally, I chose a bunch of classes at random being like, everyone else is taking these classes maybe I should too. So, I picked out some that fit into my degree, and picked out some science ones because people in school try to make it seem like an arts degree is absolutely useless. It’s like they pressure you with their judgement, and honestly, I believed they were right! It was my brother who finally told me to take a class, he had loved. That class turned into biological anthropology and was the best class i had ever taken. I fell in love with anthropology right there. I decided right there that my major would be anthropology, and my minor psychology. I actually really did not like Psych at all. Everyone will tell you it’s their favourite course and they all graduate with that major, but before you take it, test out some other classes! In my experience, psychology wasn’t what I thought it would be and was super boring. It stayed as my minor because I had take enough classes that I had enough credits to graduate with it as a minor.

Even though I loved anthropology so much, I still was trying to decide on an “actual degree”. Meaning- I was looking for a degree with a guaranteed job at the end. I actually clung onto the idea of nursing being the one I needed to get into. I tried many times to get in, and just couldn’t. I decided on an after degree in it instead and worked on the rest of my art degree. If we’re being honest, I wanted to be a nurse, because everyone was doing it. I just wanted to graduate and have a job and money and never have to worry ever. So, I got a job at the hospital thinking that it would give me the experience I needed to get a job at the end. Here’s what happened: I got the job, went into work, and realized nursing is a disgusting job and super hard career choice! I mean I should have known- my mom is a nurse! Wow, the workload, the amount of butts you have to clean, the people you deal with, how they’re treated by doctors, how nurses treat each other- just wow. A lot of people take nursing today without working in a hospital previously, and making the same decisions I did, and realize the SAME thing! They end up quitting or being stuck in a job they hate. This does not have to be you- you’re not stuck and it’s ok to quit if you don’t like it no matter what it is you’re taking. (Also nothing against nurses at all, you guys are amazing for what you do! I just found that it wasn’t for me!) Also, I recommend getting experience before hand, in the end it’ll benefit you if you do love it and are trying to get a job! For teaching, I volunteered at a school and realized I hated it, for nursing I picked up a hospital job. Anyways, I was still like, it’s ok I’ll eventually get onto a GOOD unit and that’ll change EVERYTHING. Ya Erin, ok.

And then I went to Italy. I had been debating on being in biological anthropology for a while and possibly getting a masters in osteology (the study of human remains). To do this, would mean that I would have to live elsewhere. Canada is just to new of a country to have the archaeology I wanted to do. Just as a side note: Anthropology is the study of humans. Plain and simple! It then starts splitting off into different areas: cultural anthropology is the study and recording of present day cultures and that can go into some cool fields. There’s Linguistics the study of languages, also very cool! Some people in this field end up recording dying languages before they run out of speakers! There’s many directions to get into in this field. There’s archaeology- which focuses more on prehistory and cultural change over time (aka Indiana Jones). Finally, there’s biological anthropology- my favourite- which studies more evolution and variation. As you can see, there is no mention of dinosaurs. Yup, that is palaeontology. I’s hard for people to wrap their brains around this. They see digging for both and think they are connected, but they are not.

So, as you can see, I was seriously debating my options. Nursing meant living near family, biological anthropology meant moving. Kathleen and I decided to go to Italy to see if we liked any field of anthropology. We ended up not even doing biological anthropology at all, and ended up doing lab work in an archaeological field. Italian archaeologists, had dug up pottery from one of the bath houses in Pompeii, and the job we signed up to do was to clean, and organize pottery! I’ll talk more about this in future posts because I could talk for years about this! My main point is, is I went to Italy and archaeology won out instantly. The idea of nursing seemed ridiculous and I couldn’t believe I was going to try to make a job I didn’t like work for me.

Last summer, I finished my anthropology degree and I am so thrilled to have done it. Now I love my degree more than anything. I still have one problem. It’s so hard to use this degree in Canada in this field. Now that I have a degree, there are tons of jobs I can get, especially government positions, but none of those appeal to me. I was stuck again. What can I do in Canada? Moving to Europe is too much for me right now, but what could I do here! So, my mom bought me a plane ticket to Vancouver to visit my cousin right after I graduated. I worked with her making props for theatre productions, movies, and TV shows, and fell in love again with another job.

I’m happy to say that I plan on moving to Calgary in September to go to school for theatre production, and then to Banff after that. It’s been a long road to find what I love, but I want to thank everyone along the way for the advice, for letting me volunteer and help out, giving me opportunities to help me find what I love to do. I may never make any money from doing this, but to me, finding something challenging and that I love doing is far more important in all respects. And if I fail, I still have an awesome degree to help me out! 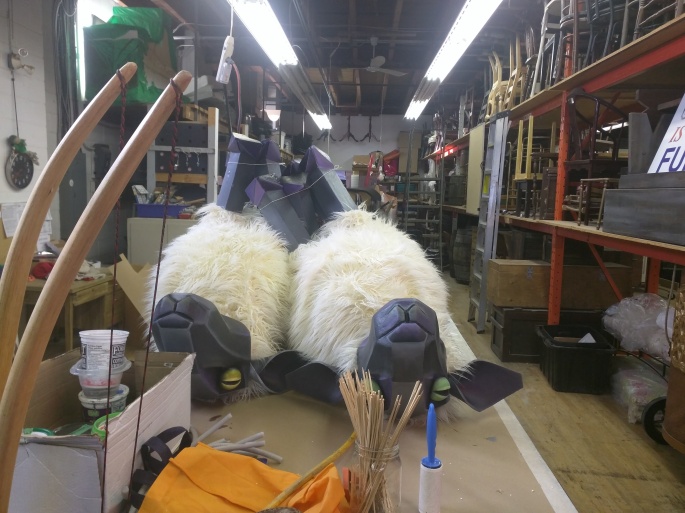 So, you can expect me to be challenging myself and doing prop work, and when I’m not doing that, I’ll be doing some archaeological work around the world! Two jobs that I’m so passionate about, can do anywhere ( I would like to live in London someday, just no one to move with yet), and will love doing for the rest of my life.

My take home message is this: volunteer when you can to learn about the job you want! What are your interests? Start networking with people and learn the pros and cons of the job. There will be cons with every job, but are they worth it to you? If you can get through them, that job is for you! And don’t be afraid to put yourself out there! Just do it. People will tell you all “ You won’t make any money, You don’t have benefits, you’ll never get a job with an arts degree.” Here’s the reality. It’s going to be hard, but it’s going to be worth it. Money isn’t everything, do what you love and work hard at it. An arts degree can get you to a lot of places. You can get government positions for just having a degree. No matter what degree you have, school is worth it and the fact that you accomplished getting a degree is amazing!!! Good for you! I have been trying to convince myself out of going to school again all year. But I’m finally realizing that I can’t listen to others, I have to do what makes me happy, so that’s what I’m going to do!