So as you know, I did recently go to Mexico! Such a fun trip! One of the best parts of the trip was booking an excursion. Excursions are activities you can plan that the company you booked with have available for you to do. Basically it’s an added expense to do various activities. They normally last about a day and the company plans to anything ranging from snorkelling in a private location, to ziplining in the jungle. There was also whale watching (only in certain months because of whale migration), scuba diving, cave tours, visiting ancient ruins or sites, and simply going into town. They are super fun and add something to a trip.

My friend and I booked with a company called Sunwing. When we wanted to check out excursions, they were sitting at a table in the main lobby in our hotel where we could go ask them questions. Easy to find, and they will let you know the best excursions and for whatever price range. The most extravagant excursion was dinner and a show (cirque du soleil quality). It was called Rhythm of the Night and took place in the jungle in the dark. From my understanding it’s dinner and a show in a private part of the jungle! That was about $160 if I recall. So for the amount you get from that one (they’re way longer and there’s more to it than that), it’s actually not a terrible price! The one that we decided on was a trip to town- Puerto Vallarta- and only cost $60. It was a VERY good day!

We started off our morning picking people up from other resorts and from other hotels within Puerto Vallarta. We picked up a photographer, and she would take nice pictures throughout the day (It was only $15 for a disc of pictures). So the gist of our trip was that we paid to go into town, and we would go through the jungle next to have lunch and then end with a tour of a tequila factory.

We spent most of the morning touring through Peurto Vallarta itself. We stopped at the boardwalk called Malecon, and walked through there. The views were beautiful, and the best part was that the Day of the Dead decorations were still up! It was very cool! We actually had not meant to go for Day of the Dead, it was just the only time we were both available and the flights were cheap! When we had already bought we realized we accidentally booked it over Halloween, which is the beginning of the Day of the Dead. We also went to a parish there that was very nice. The colours were super bright, and there were flowers and sculptures everywhere- very different from the churches I saw in Rome, where colours are very similar. So other than that, we went through a few little stores! In Mexico, they always take you through a couple jewellery stores before you move on. It didn’t bug me at all, because there also was a bar in each store, so we had our tequila shots and moved on from there! 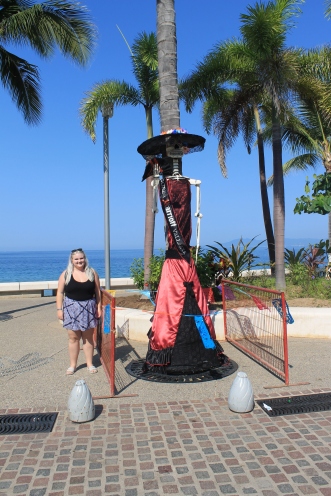 We stopped at one other store other than the jewellery store, and that was a souvenir place. I bought a really nice Day of the Dead skull in memory of me being there around that time! Basically the salesmen bargained with themselves when I was buying it! I was willing to buy it for $20 and they kept lowering the price thinking I wasn’t going to buy it! It went down so fast I didn’t even have time to reply until they’re final offer! I am a terrible bargainer- Is anyone comfortable with it? After that, we did go to the Marketplace! Neither of us bought anything, because after a while, everything starts to look the same. However, it was cool to see the decorations up and to just walk around in the sun… UNTIL the sun was unbearable! We went from kind of hot to like I can feel myself burning hot! So we, were happy to get on the bus and just drive around a bit.

This part of the trip was a surprise! When we had talked to the sunwing representative, it seemed like we would just drive through the jungle to get to the tequila factory. Instead, we stopped along the way and took some nice pictures of the views, and then had lunch in this very remote town! It was very cool, we were basically sitting outside by a waterfall, eating shrimp wrapped in bacon. There was also a lady making pitas, chips, and salsa on an open grill! The food and the food was amazing! 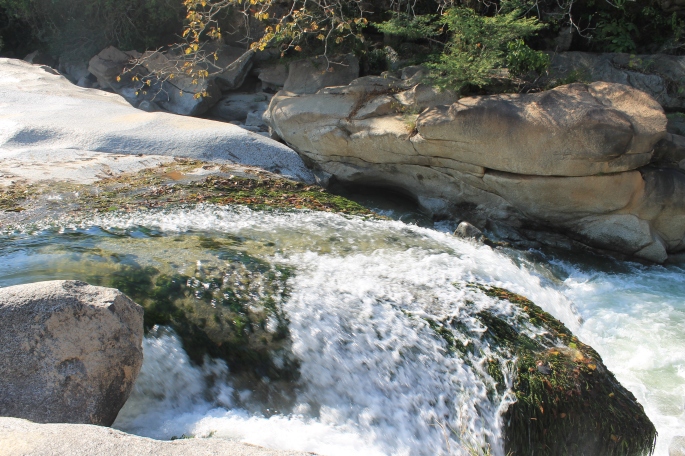 Last, we went to the tequila factory. It was a small home business. Just for the record, this was good quality tequila! They did NOT taste like that strong, disgusting, cheap brand of tequila! There was a few different kinds. He had a mandarin orange, and coffee flavored tequila- ok coffee tequila is deadly. You can use it on any deserts and in any warm drink! He had one white tequila- the strongest of the tequila family which was more manageable than a cheap shot of tequila. Last, he had three different dark tequilas. They range based on how long they’re in the barrel for. The longer, the stronger flavouring. It tastes like a woody kind of smokey flavour. Very good! 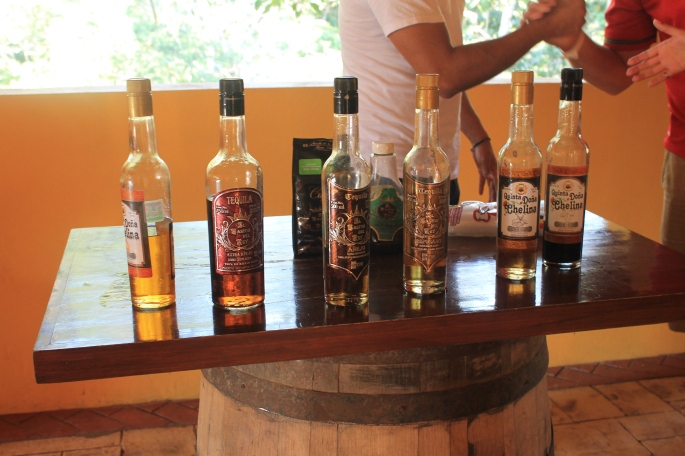 Other than that, we went back to the hotel and got back in time for supper and a beautiful sunset! It was a very good day! We saw lots and it was only $60! The cheap excursions very good if you’re looking to not spend a lot on some extra activities! Highly recommend!